November 10, 2013
It is mid spring here in NZ and my citrus trees are really starting to blossom despite starting their life in poor clay soil with wet feet. I moved them to higher slightly better drained ground just over a year ago. Most of the trees are blossoming so I decided to have a go at distilling some sweet orange blossom as this tree was laden with flowers, far too many to form fruit. 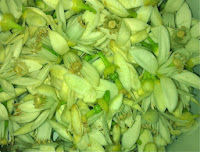 Ideally I would have liked to use a smaller copper still than my 20 litre copper Alembic still- but it is all I have at the moment. I hand picked the open flowers early in the day to preserve the aroma on them. I will be posting photos when I can access them!
I picked approximately 120 gm which filled about 2 cups and pakced these in the column of my still so they were  the water level. I had pre filled the base of the still with boiling water to speed up the heating and my still sits on a gas stove top element with speciality plumbing for the water and drainage. I set up the condenser and popped in my thermometer but it was here I made a near fateful mistake. The temperature was only about 20 degrees coming through the pipe so no steam was being created at that point so no need to turn on the cooling water through the condenser. I decided I had enough time to pop upstairs and make a cuppa as I expected to be sitting by my still for a while. Alas when I returned the temperature was at 90 degrees and burnt hydrosol coming out with no cooling effect on the condensor. That first 200 ml smelt cooked so I discarded it , chastised myself for being ill prepared and then sat and monitored it. From that 120 gm of flower  petals I obtained approximately 1500 ml of fairly decent hydrosol. I turned off the heat after that as the smell of the hydrosol was becoming quite faint. The time frame for this was about 40 minutes which was a lot quicker than other hydrosols I have distilled ( manuka, kanuka, Melissa)
I was  quite pleased with that effort and I am going to repeat it next week but this time watch it more closely and put back my remaining hydrosol into the water to redistill to see if I can get a sweeter aroma. I won't make any attempt to remove oil as it is such a small amount. I prefer my hydrosols to be complete with what ever oil molecules in them to stay there.
My next attempt will be a co distillation of rosa damascena co distilled with rose geranium and steam distilled over lemon geranium hydrosol. Wouldn't it be great to aroma blogs so I can share the aroma!

Remember pics coming soon- I didn't realize  I couldn't upload photos to blogger on an iPad for some reason! Aromaticaly yours, Wendy

Popular posts from this blog

December 28, 2013
Aloysia triphlla (Lemon verbena) in flower Lemon verbena (Lippia citriodora) or Aloysia triphylla is a precious essential oil which has a low yield and is quite hard to come by the genuine oil. Details as to its origins and habitat can be found here on Wikipedia.  It is believed many so called lemon verbena oils on the market are heavily adulterated with lemon thyme, Litsea cubeba (May chang) or synthetic citral. Previously I have used lemon verbena hydrosol my friend produced on his lavender farm ( www.lavender-impressions.co.nz ), with only a tiny amount of oil obtained. Most of his lemon verbena leaves are destined to be dried and sold as a herbal tea. On the 29 December 2013 I was able to take part in the harvest and distillation of his organic lemon verbena. The key difference this year is that it is the flowers and leaves which are being distilled, not just the leaves. Leaf only essential oil can produce a high (up to 35% citral) content which, being an aldehyde may irri
Post a Comment
Read more

January 17, 2020
This is a the first run of my small scale back yard set up on various geraniums distilled for hydrosol, using a pump to reticulate water through the condenser to save water. It means I do not have to stay close by every second for two or more hours. (I am still in the vicinity though in case of mishaps!) Day 1: Harvest of lemon geranium ( Pelargonium crispum ) this morning, stripped leaves from branches (approx 500gm plant material) and added to 3 litres of commercially distilled lemon geranium hydrosol so I get double the benefit. I don't extract any essential oil out of it. https://youtu.be/LFVPV6WHCIg . I achieved about 600 ml good quality hydrosol after 3 hours on the hot plate. (leaf 1 in picture below) Day 2: First up is rose geranium ( Pelargonium graveloans var. roseum ) with pure water (leaf 2 in picture below). Hydrosol appeared very quickly and prolifically, obtaining 200 ml within first 20 minutes of the distillation. This was distilled for about two hours  and
Post a Comment
Read more

November 17, 2019
Introducing my newest Aromatic Adventure- welcome to 'The Sultress' Parfum Naturale - an 100% vegan and natural perfume range using precious aromatic extracts to create authentic perfumes. Aesthetic Aromatherapy…-this evocative expression is all about the hedonistic blending of aromatics purely for pleasure. As an experienced aromatherapists and formulator I have also studied the finer art and science of perfumery. Inrecent times most of this has been incorporated onto skin care products for commercial clients and creating a base range of aromas to be used with a range of products. However now is the time to expand of this and offer a personalised perfumery bending service. This service is perfect if you want a truly bespoke blend just for you to use and may have incorporated into body care products or to wear as a perfume. I have a collection of over 300 precious plant aromatics to draw on and nothing can compare with the pre strength of natural aromatics. Essential Oil
Post a Comment
Read more

Wendy Maddocks
Welcome! You have come to this page via a web address (www.doctorwendy.net). This page gives a small overview of my professional aromatic and natural products background which I have been involved in for over 20 years. I also have other academic and professional skills beyond this field. I have been involved in many aspects of health care, education, research and complementary health and I am New Zealand’s only health professional who has a research doctorate exploring the use of specific complementary therapies in health care in a clinical setting. My innovative research into using essential oils in the management of radiation induced mucositis provided the background to developing the range of completely natural skin care. My aromatic musings and information can be found at www.aromaticadventures.com