I had delayed this newsletter to hopefully share my experiences making my first distillation of osmanthus hydrosol but after planting the trees a few months ago and lots of vigorous growth and a lot hot summer, there has been no sign of any flowers....I found this great website packed with information about this most incredible smelling oil and the hydrosol is just as gorgeous (http://www.leffingwell.com/osmanthus.htm) But my anticipation and excitement will have to wait a while.... 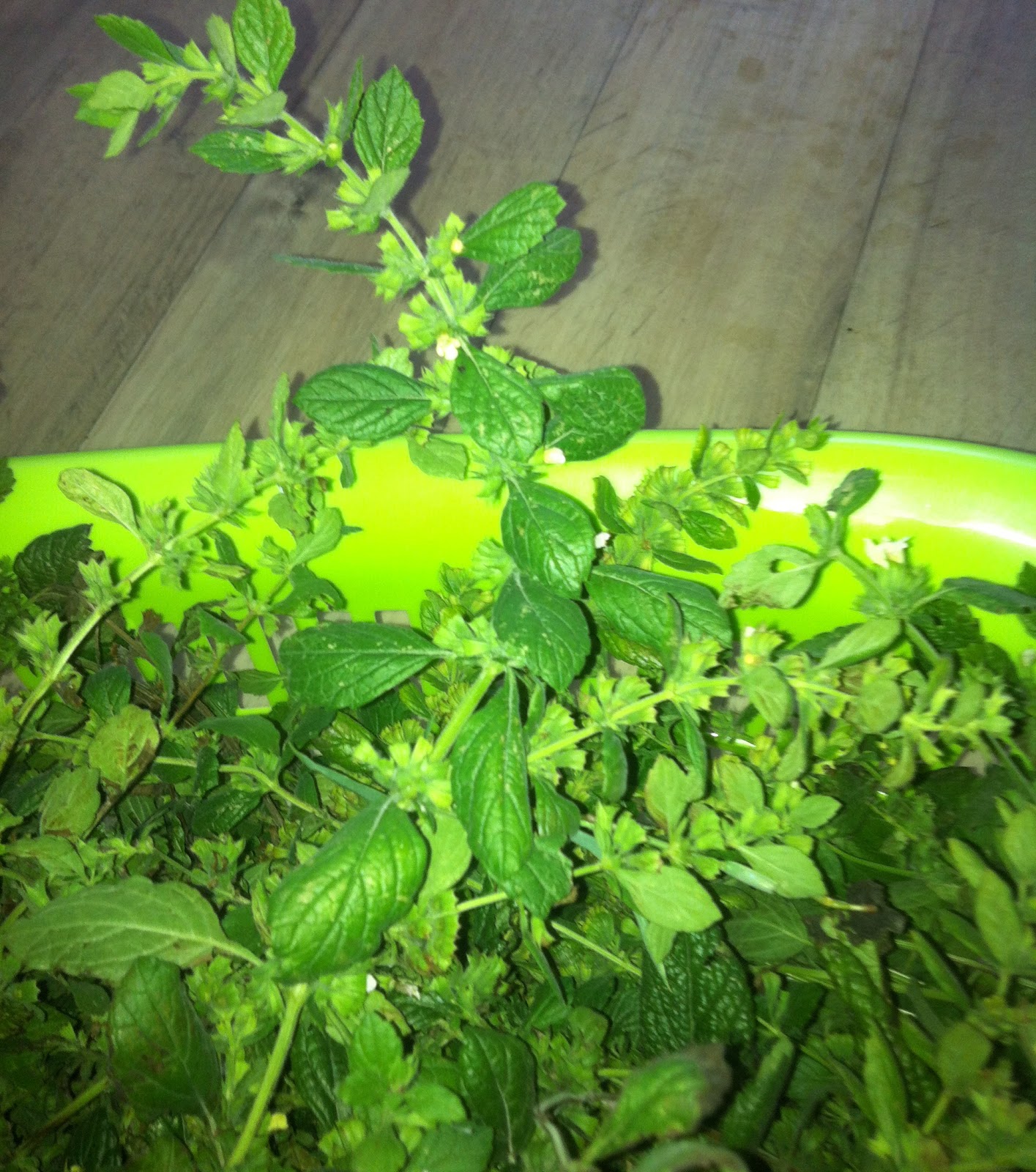 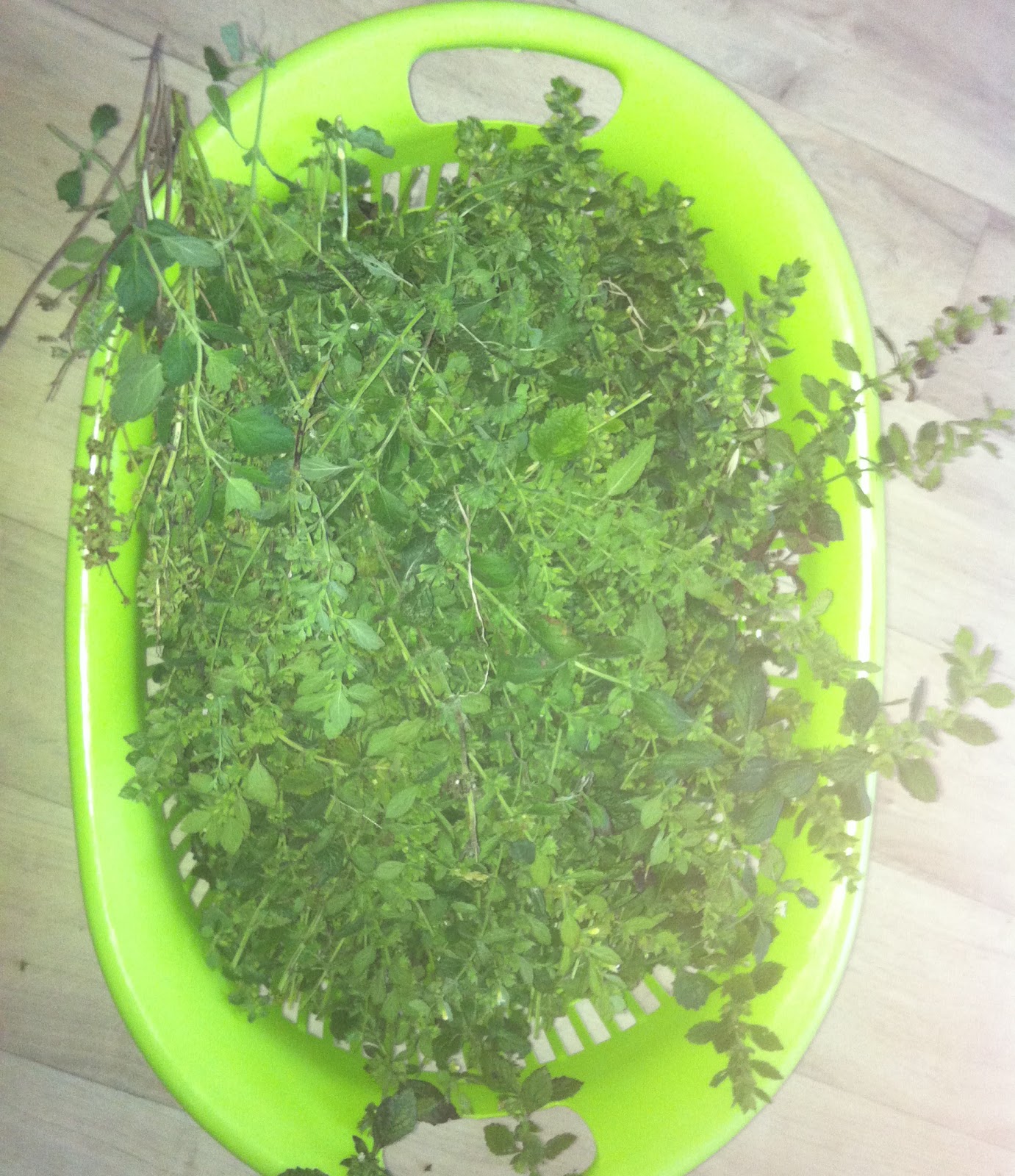 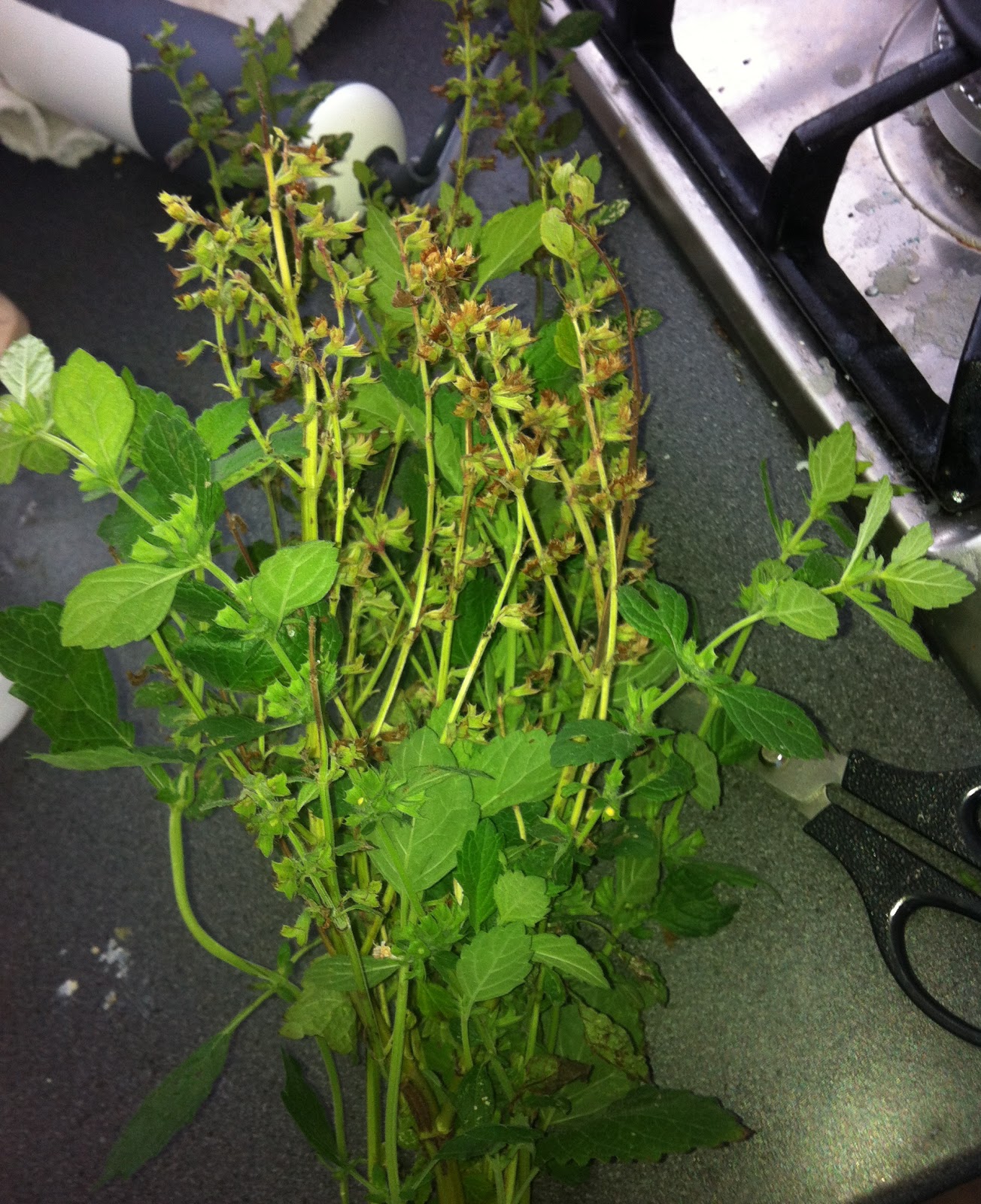 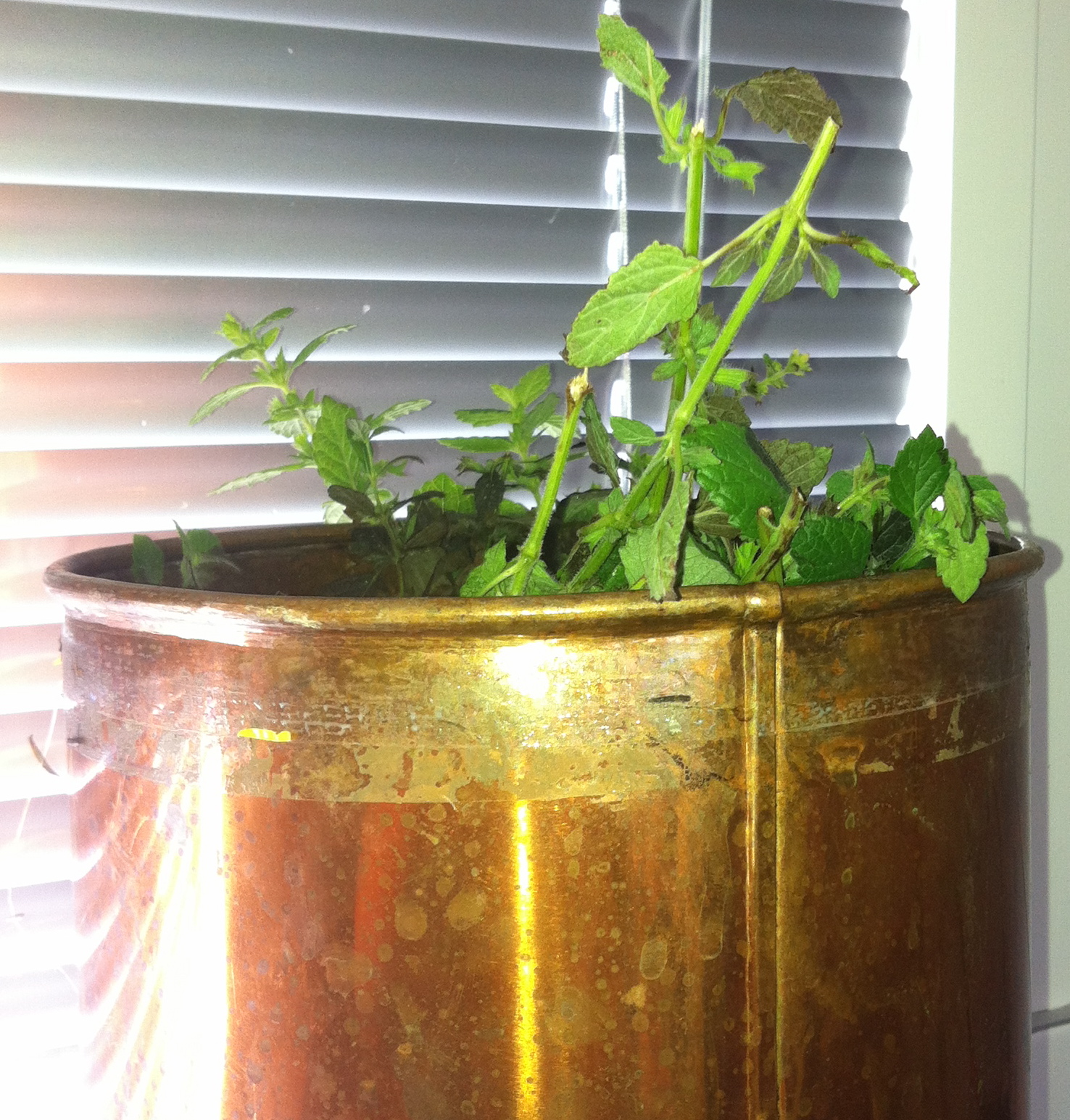 I have completed one distillation of melissa hydrosol ( about three weeks later than I had planned but it turns out waiting was a good thing as the plants not only grew bigger but there is a lot of new growth underneath to carry over to the new season. As an essential oil, melissa is one of the most expensive with one of the lowest yields. it is also often highly adulterated. So i thought I would give the hydrosol a go this year, leaving in what ever few molecules were in there.

I distilled approx. 350 gm leaves/branches as a steam distillation. I put 6 litres of water in the base of the still and my yield was approx. 2.4 litres of hydrosol. I could have carried on further but felt that the aroma was turning to a ‘cooked’ smell so left it. Comparing with the hydrosols I have done a 50% output is quite low. The aroma of the hydrosol is not as crisp and lemony as the actual plant, it almost has an earthy note to it. I could not measure the pH at this time as my meter had chosen to break! Referring to Suzanne Catty’s text, ‘Hydrosols The Next Aromatherapy’ she notes that melissa hydrosol would have a ph of 4.8-5. She states that melissa hydrosol is very stable and would last up to 2 years. As I use a copper alembic still , this will also provide some anti microbial protection. Melissa is safe to be drunken, especially at times of stress (dilute 60 ml in 1 litre of water). I find it interesting that it will assist with intestinal spasms (taken internally) and externally has use  as a soothing agent for rashes, irritations and excema. True to form I got slightly sunburnt the day I harvested, sneaking a quick dip in the spa pool in the middle of the day without any sunscreen. It was a cloudy day but here in NZ that means nothing. two days later parts of my legs are still inflamed and sore so I conducted a test using melissa as a compress- the melissa hydrosol compress was instantly soothing and cooling and seemed to speed up the healing.

New Product Review- my favourite lavender distiller, Thomas from www.lavender-impressions.co.nz sent me 2 samples of his latest hydrosols. The first is distilled olive leaves (olea europa). To my knowledge there is no such thing as an olive ‘essential oil’- any references I came across relate to the olive oil (fatty oil). However extracts from olives are gaining in popularity, especially olive leaf extract which has a substance in it called oleuropein, which is anti viral. It also believed to be effective in reducing inflammation. As hydrosols contain the water-soluble components of the leaf it would be reasonable to expect these constituents are present in the hydrosol. This hydrosol has value for those who are interested in using olive based products such as soaps or creams and which to include all of the olive in their formulation. As the aroma is not unpleasant it would be easy to incorporate it into the water phase of a product. I do not feel comfortable commenting on it’s uses as an internal product as I have not been able to find information relating to this. however as with all hydrosols, as long as there was no contamination and the hydrosol is diluted (at around 1 tablespoon per glass of water) then i can see any problems with ingesting it.

The other hydrosol thomas sent to me to try is the Tahitian lime which again is the leaves and twigs (petitgrain). This batch has a woody, slight citrus top note with a smooth honey aroma at the base. it is quite pleasant and not at all over powering. I have used this product for its toning and skin tightening effects such as for products made for use in oily skin, deodorants  and gels. if you love petitgrain oil then you will love this hydrosol. I have had past batches last for up to 2 years before any signs of contamination. both these hydrosols are available from www.lavender-impressions.co.nz

Popular posts from this blog

December 28, 2013
Aloysia triphlla (Lemon verbena) in flower Lemon verbena (Lippia citriodora) or Aloysia triphylla is a precious essential oil which has a low yield and is quite hard to come by the genuine oil. Details as to its origins and habitat can be found here on Wikipedia.  It is believed many so called lemon verbena oils on the market are heavily adulterated with lemon thyme, Litsea cubeba (May chang) or synthetic citral. Previously I have used lemon verbena hydrosol my friend produced on his lavender farm ( www.lavender-impressions.co.nz ), with only a tiny amount of oil obtained. Most of his lemon verbena leaves are destined to be dried and sold as a herbal tea. On the 29 December 2013 I was able to take part in the harvest and distillation of his organic lemon verbena. The key difference this year is that it is the flowers and leaves which are being distilled, not just the leaves. Leaf only essential oil can produce a high (up to 35% citral) content which, being an aldehyde may irri
Post a Comment
Read more

January 17, 2020
This is a the first run of my small scale back yard set up on various geraniums distilled for hydrosol, using a pump to reticulate water through the condenser to save water. It means I do not have to stay close by every second for two or more hours. (I am still in the vicinity though in case of mishaps!) Day 1: Harvest of lemon geranium ( Pelargonium crispum ) this morning, stripped leaves from branches (approx 500gm plant material) and added to 3 litres of commercially distilled lemon geranium hydrosol so I get double the benefit. I don't extract any essential oil out of it. https://youtu.be/LFVPV6WHCIg . I achieved about 600 ml good quality hydrosol after 3 hours on the hot plate. (leaf 1 in picture below) Day 2: First up is rose geranium ( Pelargonium graveloans var. roseum ) with pure water (leaf 2 in picture below). Hydrosol appeared very quickly and prolifically, obtaining 200 ml within first 20 minutes of the distillation. This was distilled for about two hours  and
Post a Comment
Read more

November 17, 2019
Introducing my newest Aromatic Adventure- welcome to 'The Sultress' Parfum Naturale - an 100% vegan and natural perfume range using precious aromatic extracts to create authentic perfumes. Aesthetic Aromatherapy…-this evocative expression is all about the hedonistic blending of aromatics purely for pleasure. As an experienced aromatherapists and formulator I have also studied the finer art and science of perfumery. Inrecent times most of this has been incorporated onto skin care products for commercial clients and creating a base range of aromas to be used with a range of products. However now is the time to expand of this and offer a personalised perfumery bending service. This service is perfect if you want a truly bespoke blend just for you to use and may have incorporated into body care products or to wear as a perfume. I have a collection of over 300 precious plant aromatics to draw on and nothing can compare with the pre strength of natural aromatics. Essential Oil
Post a Comment
Read more

Wendy Maddocks
Welcome! You have come to this page via a web address (www.doctorwendy.net). This page gives a small overview of my professional aromatic and natural products background which I have been involved in for over 20 years. I also have other academic and professional skills beyond this field. I have been involved in many aspects of health care, education, research and complementary health and I am New Zealand’s only health professional who has a research doctorate exploring the use of specific complementary therapies in health care in a clinical setting. My innovative research into using essential oils in the management of radiation induced mucositis provided the background to developing the range of completely natural skin care. My aromatic musings and information can be found at www.aromaticadventures.com